Hello readers, today in this article, we will discuss the Net Worth of Eddie McGuire in 2022. He is an Australian journalist, television presenter, and Australian Football League commentator.

In this article, apart from his net worth, we will also discuss Eddie’s early life, career, personal life, and much more. So read this article till the end.

Also, before bouncing off this article, don’t forget to watch the Eddie McGuire tribute video for Bert Newton at the end of this article. 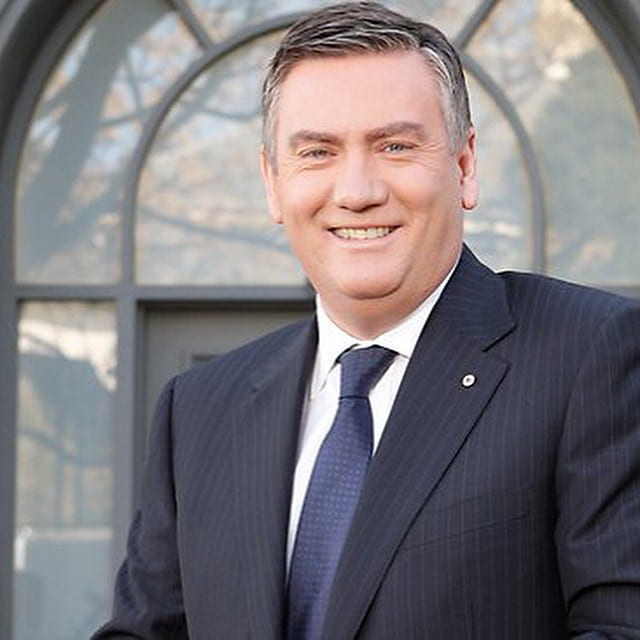 Eddie’s full name is Edward Joseph McGuire. He is the former president of the Collingwood Football Club. Moreover, he is also the former CEO of Nine Networks.

Currently, he is the director at the Victorian Major Events Company. Apart from that, he even occasionally writes for the Herald Sun newspaper.

Related: What is Net Worth of Tony Abbott?

He was born on 29 October 1964 in Carlton, Victoria, Australia. His father, Edward McGuire Sr, worked with the Board of Works, and his mother, Bridget Brennan, works at the local factories.

Eddie also had three siblings an elder sister Evelyn, elder brother Frank, and younger sister Brigette. His family works very hard to come out of poverty. Moreover, he has attended the Christian Brothers’ College, St Kilda, by getting the scholarship.

Related: What is Net Worth of Ben-Roberts Smith?

He got his first job as an Australian Rules Football statistician and reporter for The Herald through the help of his brother Frank who is working as a newspaper sports reporter.

Eddie did that job until 1982 and later on became a cadet sports reporter for Network Ten. In 1993 he was transferred to Network Nine, where he hosted various sports shows.

Apart from this, in the same year, he also hosted the Sydney New Year’s Eve. From 2003 to 2005, for three consecutive years, he hosted the Australian Logie Awards. In January 2007, he became the host of the Australian version of the quiz show 1 vs. 100

In June 2008, he became a temporary host for the show A Current Affair. On his first night of hosting the show, the number of viewers of the show increased, with 1.42 million viewers watching the show.

Later on, in 2009, Eddie hosted a telethon for the victims of the Victorian bushfires. Furthermore, since 2009, Eddie has been a host of the teatime game show Millionaire Hot Seat.

In early 2011, he hosted another prime-time quiz show named The Million Dollar Drop. However, the show doesn’t do well, and only six episodes of the show are telecasted.

So, later on, he became the host of the sports-themed quiz show Between the Lines. But this show also failed to get high ratings, and the show only lasts for four episodes.

In 2012, Eddie joined Fox Footy as an AFL commentator. But at the same time, he still works with the Nine Network to host Millionaire Hot Seat.

In July 2017, he returned to The Footy Show because of the show’s poor ratings. Moreover, this time Eddie’s company JAM TV produced the show.

Later on, in December 2018, he announced that The Footy Show format would be replaced by the new format. However, the show got canceled in 2019 after some episodes.

In June 2020, he hosted an AFL radio show Aussie Football Rules America with Eddie McGuire. Apart from that, he also hosts the AFL match of the week on Sirius XM satellite radio and Dan Patrick Radio.

In October 1988, he became the president of Collingwood Football Club. He stepped down from his position in 2020.

In February 2006, Eddie became the new CEO of Nine Network. For this, he needs to sacrifice his two on-air shows, The AFL Footy Show and Who Wants to Be a Millionaire?. In June 2007, he resigned from his CEO position and took a new position in programming services.

Related: What is Net Worth of Andrew Bolt?

Eddie is married, and his wife’s name is Carla Galloway. Moreover, the couple has two sons named Joseph and Alexander.

Related: What is Net Worth of Samantha Armytage?

What is the Updated Net Worth of McGuire in 2022?

Eddie McGuire is an Australian journalist, television presenter, and Australian Football League commentator. He has accumulated most of his wealth through his salary by working on different TV and Radio Shows.

Moreover, he also worked as a CEO of Nine Networks and as a Director of the Victorian Major Events Company, through which he generated a great wealth.

Apart from that, he also made a significant amount of money by serving as president of the Sports Club, which also contributes to his net worth.

The updated Net Worth of Eddie McGuire in 2022 is $55 Million. Moreover, Eddie’s estimated annual salary is around $3.5 Million. Currently, he is living a lavish life with his family.

He owns a luxurious house in Toorak that is worth around $11.9 Million. Moreover, he also owns a BMW X-5, worth a half-million dollars. Eddie likes to spend his money by going on vacations to different places with his family.

I hope this article provides you with helpful information about journalist and commentator Eddie McGuire. If you found this article worth reading, don’t forget to share it on social media.