Hello readers, today in this article, we are going to discuss the net worth of Hardik Pandya in 2021. He is an Indian International cricketer.

Hardik Pandya is an all-rounder who bowls right-arm medium-fast and bats right-handed. Moreover, he plays for Mumbai Indians in IPL.

In this article, apart from his net worth, we are going to discuss his early life, career, and much more.

Before bouncing off, this article don’t forget to watch the Hardik Pandya lifestyle video at the end of the article. 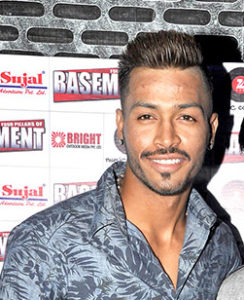 Hardik Pandya’s full name is Hardik Himanshu Pandya. He is an Indian International cricketer, and he plays for Baroda in domestic cricket since 2013.

He made his ODI debut in 2016 on16th October against Newzeland at Dharmsala. Moreover, he became the fourth Indian to be named on his ODI debut after Sandip Patil,  Mohit Sharma, and K. L.  Rahul. Furthermore, he is selected in ODI X1 of the year by Cricinfo.

He was born on 11 October 1993 in Surat, Gujrat. Hardik father Himanshu Pandya runs a business of car finance in Surat. Later on, he shut down his business and moves to Vadodara when Hardik was 5. He did so to provide his sons with better cricket training facilities.

After this, Hardik was sent to Kiran More’s cricket academy in Vadodra. Furthermore, his family was financially weak, and they live in a rented apartment in Gorwa. Hardik goes to MK High School till 9th grade then dropped out to focus on cricket.

He made steady progress in junior-level cricket and won a lot of matches single-handedly. However, he got a drop from his state age group team due to attitude problems.

He plays for Baroda in domestic cricket. He also plays a vital role in Baroda in winning Syed Mushtaq Ali Trophy.

In January 2016, Hardik score 86 runs with the help of 8 sixes to help the Baroda cricket team to get six wickets to win over the Vidharba cricket team in the Syed Mushtaq Ali Trophy.

In 2017 against RPS(Rising Pune Super Giants), Hardik scores 30 runs in one over and make it a record.

In the 2018 IPl auction, he was retained by Mumbai Indians for ₹ 11 crores. Hardik has a decent league this season. However, his bowling impresses more than his batting.

In the 2019 season, he gives an all-round performance. He scores 402 runs and took 14 wickets in 16 matches. He was the super striker of the season for Mumbai Indians, with his strike rate more than 170.

In Asia Cup 2016, Hardik scores 31runs on 18 balls against Bangladesh and take one wicket to secure a win. Then in the next match against Pakistan, Hardik takes three wickets by giving eight runs.

In the 2016 World Twenty20, on 23 March, Pandya took two wickets in the final over of the match against Bangladesh to help India beat Bangladesh by one run.

Hardik’s best bowling figures of 4 for 38 come on 8 July 2018 in a match against England. In this same match, Hardik scores 33 runs on14 balls. Hardik becomes 4th Indian to take four wickets and score 30 runs in a T20I in the same game.

Hardik Pandya made his ODI debut for India on 16th October against Newzealand at Dharmshala. He became the fourth Indian player to be named on debut after K.L. Rahul, Sandip Patil, and Mohit Sharma. Hardik scores 36 runs on 32 balls in his first ODI innings as batsmen.

In the group stages of the ICC Champions Trophy Hardik Pandya hit three sixes consecutively on three balls of Imad Wasim. On 18 June 2017, in the final of the Champions Trophy at the Oval Hardik scores 76 runs on 43 balls.

Hardik Pandya was picked for the test squad as a batsman for their home series against England in late 2016. However, he was drop out because he injured himself while doing practice in nets at PCA Stadium.

Then he was named in the squad of India, which tour Sri Lanka and he plays his first test match on 26 July 2017 at Galle. In the 3rd Test against Sri Lanka in Pallekele.

Hardik scores his first century and makes the record of becoming the first Indian batsmen to score a century just before lunch. He also makes a record of scoring the most runs in a single over in a test match for India.

On 1 January 2020, he gets engaged to Serbian actress Natasa Stankovic. Natasa was first seen in Prakash Jha’s movie Satyagraha.

After this, she appears in a TV reality show BigBoss through which she gains massive popularity. Moreover, on 30 July 2020, the couple was blessed by their first child Agastya Pandya.

What is the Updated Net Worth of Hardik Pandya in 2021?

Hardik is one of the most respected players around the globe. Most of his earning come from cricket matches, brand endorsements, and personal investments.

The updated Net Worth of Hardik Pandya in 2021 is $4 Million, which is equal to ₹30 Crore. Moreover, there is an increase of 22% in his net worth from the past few years.

He lives with his family and brother in a luxury designer house in Gujarat, India, whose current value is ₹crore. He also owns several real estate properties across the country.