Hello Readers, today in this article, we will discuss the Net Worth of Technical Guruji (Gaurav Chaudhary). Gaurav Chaudhary is an Indian Youtube Personality who is based in UAE.

Gaurav Chaudhary is famous for making Tech Videos on Youtube, and he is professionally known as Technical Guruji.

In this article apart from his Net Worth, we will also discuss Technical Guruji early life, career, personal life, and much more. So read this article till then end.

Before bouncing off the article, don’t forget to watch Gaurav Chaudhary aka Technical Guruji Success story video at the end of this article.

Gaurav Chaudhary is a Tech Youtuber and Vlogger. His Tech Channel Technical Guruji give him the record of the World’s Most Subscribed Tech Youtuber. Currently, his channel has 19.4 million subscribers.

Gaurav has also featured in Forbes India’s 30 under 30 list.

Related: What is Net Worth of CarryMinati?

He was born on 7 May 1991 in Ajmer Rajasthan. Moreover, he did his schooling from the Kendriya Vidyalaya School up to Class 10th. He got 83.6% in his 10th board exams.

After completing the 10th class, his family moved to Bikaner due to his father’s job. During that time his brother moved from Ajmer to Dubai to set up the business there.

When his family moved to Bikaner, he again joined the Kendriya Vidyalay School and continue his studies in the Science stream with Maths. He also got his first coding experience in 11th with the language C++. He has only studied Hindi up to 10th class, but by seeing his fast Hindi in his videos, you won’t believe it.

In January 2007 his father went into a coma due to an unfortunate car accident. At that time he was pursuing B.Tech in electronics and communications from an engineering college in Bikaner.

Gaurav father remained in the coma for some time and then died when Gaurav was in his 3rd Sem.  That was a tough time for Gaurav, but he stands strong and focuses on his studies as well as holds his family together during that hard time.

In 2012 after completing his B.Tech he and his mother permanently moved to Dubai where he pursues M.Tech in microelectronics from BITS Pilani, Dubai Campus.

While pursuing M.tech in Dubai, he received a certification to work with security systems from the Dubai police. So later on, he set up his own security company in Dubai.

Gaurav is a regular watcher of Youtuber Since 2008 and always wanted to create his own Youtube Channel. So once he successfully set up his business, he started his Youtube channel and started working on it part-time. Even till now also he runs Youtube Channel as a passion which can be the main reason behind his success.

Before starting his channel, he met with Praval Sharma who runs the channel Sharmaji Technical. . He decides to met him because both Praval Sharma and Gaurav studied from the same College in Bikaner and he liked his Hindi Tech videos very much.

Before creating his own channel, he uploads some videos on Sharmaji Technical Channel due to which people start knowing him, and his channel gets an initial boost.

From the day he starts his channel to till now he uploads two videos regularly. His consistency is one of the reasons whey Technical Guruji is the most subscribed Tech Youtube channel in India.

Gaurav channel Technical Guruji grows very much quickly, and In November 2018 he has more than 10 million subscribers on his youtube channel. Currently, his channel has more than 19 million Subscribers, and soon he will touch 20 million. Moreover, Technical Guruji is the most subscribe Tech Youtube channel in the World. Previously it was Unbox Therapy.

Some other reason why his channel grows quickly is that he always keeps himself with the trending topic as you can see with the below video. Furthermore, after creating his channel, he never looks back and keeps growing day by day. On his channel, he uploads more than 3 thousand videos till now.

Gaurav also has one more channel with his own name Gaurav Chaudhary. On this channel, he uploads Vlogs mainly travelling vlogs.

Currently, his channel has more than 120 videos and 3.9 Million subscribers. Moreover, soon he will touch the 4 Million mark.

On his this channel he uploads videos with various big celebrities including Honey Singh, Kapil Sharma, Nora Fatehi, and Virat Kohli as you can see below.

Related: What is Net Worth of Harsh Beniwal?

Currently, he is unmarried, but we don’t know much about his personal life as he likes to keep it private. Moreover, Technical Guruji is a name that comes in controversies various times.

He is involved in controversies with some other YouTubers like Technical Sagar, Sharmaji Technical, Geeky Ranjit, GauravZone, and Techno Ruhez.

Both Technical Sagar and Technical Guruji get involved in controversy two years ago. Both of them made some videos against each other. However, later on, both of them removed those videos from their channels.

One year ago, he came into a controversy with the Sharmaji Technical who is the one with whom he starts his Youtube journey.

He also gets in a controversy with Geeky Ranit. In the past, both of them are good friends and frequently appears on each other channel. But later on, something happened between them, and there were various rumours about them. Nothing is much clear, but, surely, they are not friends anymore as it is clear from Geeky Ranjit below tweet. 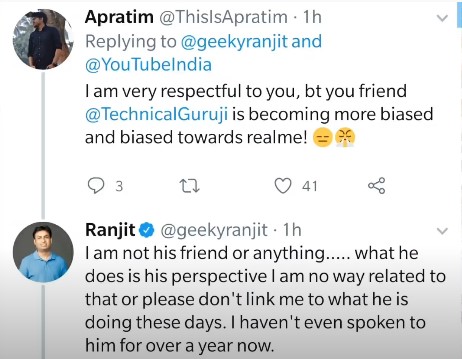 He not only get into a controversy with the YouTubers. Once He comes into a controversy due to his video of Redmi Note 7 which was one of his popular videos. In the video, he does a bend test of the phone and applies very much pressure on the phone due to which it breaks.

After uploading this video, many people come against him. Many videos are uploaded against him, and some also claim that he is trying to take revenge from the company MI.

Gaurav replied to some of his controversies on his Youtube Channel two years ago as you can see in the below video.

Related: What is Net Worth of Ashish Chanchlani?

What is the Updated Net Worth of Technical Guruji (Gaurav Chaudhary)in 2021?

Technical Guruji has two sources of income. His primary source is his security business in Dubai and his secondary source his Youtube.

The updated Net Worth of Technical Guruji aka Gaurav Chaudhary in 2021 is $50 Million which approximately equal to ₹320 Crores. Moreover, he earns ₹50-60 Lakhs from Youtube every month. From Youtube, his primary source of earnings are from Google Adsense and Brand deals.

Although he earns a lot of money income through Youtube but still his primary source of income is his Business in Dubai.

Currently, Gaurav is living a luxurious life in Dubai. He has bought several properties in Dubai, and the house in which he lives is worth ₹60 Crore. Apart from this he also owns a lot of his family land in India.

Gaurav has a quite big collection of expensive cars which includes Rolls Royce Phantom, Audi A6, Mercedes Benz ML-500, and BMW 750 Li. He also owns a bike Suzuki Hayabusa.

I hope you enjoyed reading this article about Technical Guruji. If you found this article helpful don’t forget to share this with your friends.